The problem with Mycenae 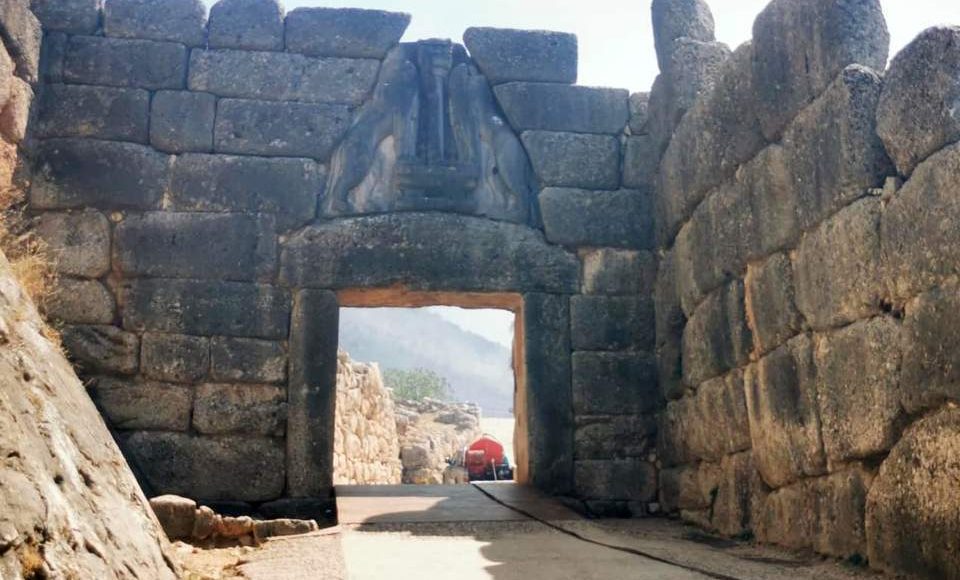 “At most what visitors will see in the coming days is some black on the ground”. This incredible statement by the Minister of Culture in charge, Lina Mendoni, summarises in the most eloquent way the anxious attempt by the government and especially the political leadership of the ministry of Culture to tone down, until there’s nothing left, all the tragic things that took place in the Mycenae archaeological site.
It’s obviously tragic, in the year 2020, for an uncontrollable fire to enter an archaeological site which is included in the UNESCO World Heritage List since 1999, passing and burning an archaeological place of such world significance, as if it were a random unprotected field. Not because fire takes pity at anyone, but because, as it turns out from the first information we have gathered, a series of events and omissions show serious responsibilities that the government and relevant ministers are attempting to cover up and deny.

The first major issue that comes up is that in the archaeological site of Mycenae the is no running water connected to the municipal network! As if that was not enough, there wasn’t, in mid-August, neither a Fire department vehicle stationed there, nor a water tanker in a nearby area, while the first fire trucks arrived with a significant delay, in about 50 minutes from a distance of only nine kilometres away.
Note, as well, that, despite the circulating information, there was no provision for a fire protection zone around the perimeter of the area, while there isn’t any decent working fire safety system in place! Above all, these appear to be secondary to the government, whereas the point of major concern is the communication management of the issue. What else does the haste of the minister of Culture’s communication staff prove by posting in the official Social Media accounts carefully selected, “crystal clear” pictures from the Lions’ Gate and the Atreus Treasure? It’s obvious that all these are in the service of appearing that “not much happened in Mycenae”.

— Ministry of Culture (@cultureGR) August 31, 2020The Lions’ Gate and the Atreus Treasure today, 31st of August. The monuments that dominate the Argolic plain since the 2nd millennium b.C. were unaffected by yesterday’s fire. The Mycenae museum operates as usual today and as of tomorrow so will the archaeological site.  pic.twitter.com/sDMLwulerE
— Ministry of Culture (@cultureGR) August 31, 2020

The photos, which may well be archive photos, are accompanied by the caption: “The Lions’ Gate and the Atreus Treasure today, 31st of August. The monuments that dominate the Argolic plain since the 2nd millennium B.C. were unaffected by yesterday’s fire”. If it weren’t for the dozens of photographs and videos from local media cameras and agencies such as Eurokinissi, one would think that the fire did indeed pass by the site leaving no trace on the monuments. Perhaps as a sign of respect to the country’s cultural heritage…or as not to disprove the account managers who are mass-concealing the dozens of critical comments by users who post the “inappropriate” photos. The communicators even forgot what was initially mentioned in the ministry’s announcement the day before, where you can read: “The areas that were affected inside the archaeological site were: the area of the archaic temple on top of the hill, the upper western slope of the Acropolis, the SW District and the area of ​​the Religious Center of Mycenae”. In other words, about half the archaeological site was affected, but who’s to bother looking for the site’s topographical information now?

The most loyal pens could of course not be missing from the government’s and Lina Mendoni’s arsenal for the communication counter-attack to the serious accusations by the opposition. Leading once more in this capacity was Aggeliki Koti from Liberal.gr, with the epic quote: “although the vaulted tomb from where the fire started, has been named “the Treasure of Atreus” and / or “Tomb of Agamemnon”, it is known that both Atreus and Agamemnon were mythical figures. Therefore the cries regarding “the tomb of Agamemnon being burned” can only be considered as graphic”. Right! However, the ministry of Culture itself officially calls the specific monument that way, both in the aforementioned post as well as in the official presentation page of the archaeological site. Are all of them graphic?

Of course, the veteran reporter offers, by the way, a summarised lesson in journalism: “Reportage? What’s that? The worst thing that some small-time journalist comes up in his office, holds true. A contest, to see whose imagination will fly higher. […]. As we, the people of Liberal.gr, have been real workers of information, let’s first see the truth, and then we can deal with fake news. Elementary journalism lesson one: In order to maintain a view, since you cannot be on site, contact those involved in the event. Like those who were on the spot and witnessed what has happened. Or those who have been informed in detail, like the local curator of antiquities. You may also interview local tour guides, antiquities guards or you may attend certain Social Media’s accounts”. Or else which conclusion does one draw from the thorough report: Mycenae was not burned (!); but maybe it squealed a bit or its… poussi [Greek slang for dried pine needles] was just burned, as Lina Mendoni says.